The history of Riuttala reaches as far as 1657, from when a mention of the farm can be found in a map of areas ruled by Peter Brahe. In 1975 ownership of the farm was passed from Ikäheimo family to Riuttala Foundation for Conservation of Peasant Culture and Heritage. During the first summer a majority of the farms property was either purchased by or donated to the foundation. Restoration began in fall of 1975, with aim to return the farm to it’s early 20th century appearance. The museum represents this time period today. The 14 hectare grounds includes over 20 peasant buildings, such as the main manor house, workshop, windmill and a particularly large grain drying barn. What makes the museum unique along with its size are the same items that were used by the inhabitants in the past.

Riuttala and its environs were chosen to represent the Finnish countryside and its way of life in Paris World Fair in 1900. Photo by I.K. Inha, 1899

All of the present buildings were built during the Ikäheimo family ownership. The main manor house was completed in 1852. In the back row of the picture you can see Katri, Hannes, Hilda, Aimo and Hanna Ikäheimo. The two people in the front are Eeva-Sofia and Alpo Ikäheimo. The photo was taken in summer of 1932.

Riuttala was owned by the same family for a long time. The ownership dates back to th 18th century at the very least. The family name has changed, however, as ownership has changed to the daughters side of family. The first owner known by name was Tuomas Paavonpoika Maaranen, from who Sylvester Tiitinen bought the farm. After his death ownership was transferred to his son Antti Tiitinen. After his death at a young age, the matron of the house, Ingebor Karhutar, married Petter Heikkinen. The sons from the two marriages, Lauri Heikkinen and Antti Tiitinen Jr. , inherited the farm and oversaw it for some time until Antti received complete ownership. He eventually stepped down but continued to work at the farm, with his nephews Lauri and Juhani Korhonen gaining ownership. In 1820 Lauri’s son-in-law Tahvo (Staffan) Ikäheimo gained joint ownership, after which it was passed down from father to son up until 1975. The owners were named Juhani (Johan), Joel (Johan Joel), Taavetti, Johannes and Alpo.

The main manor house was completed in 1852. In a fashion typical to dwellings in North Savo at the time, it is a twin-cabin house constructed out of logs. Aside from the dwelling rooms, it includes an entry room, a chamber and a pantry. A second doorway between the last two exits to the upper yard.

To the left from the entry room is men’s room, which was the center of everyday activities in the house. Men did woodwork and women baked bread in the same space. The large oven could fit 24 two kilogram rye breads in it at a time. Photo by Matti Räsänen, 1970. 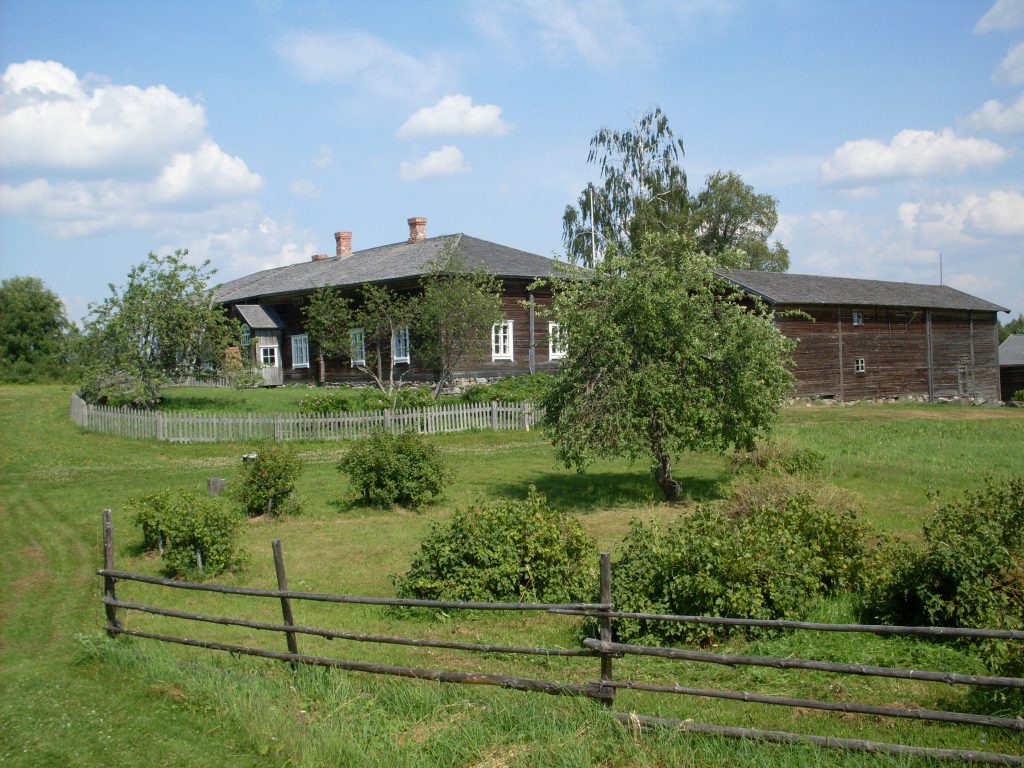 Loviisa Mykkänen, Riuttala’s matron, was from the Mykkänen family of Maaninka and was famous artist Pekka Halonen’s aunt. Because of this, Halonen visited Riuttala with his family and wife Maija during several years. Halonen painted Ateria (Meal, 1899, pictured right) in Riuttala. He is also believed to have worked on several other paintings at the time, such as Erämaa (Wilderness, 1988) and Viulunsoittaja (Violinist, 1900). According to a certain story Pekka’s brother Antti Halonen made the kantele that can be found in women’s room. Anton Lindforss, a photographer famous for picturing themes related to Savo, is known to have visited Riuttala.

(We reserve the rights to any changes that may occur)